Posted on November 6, 2011 by spikekalashnikov

“The picaresque novel (Spanish: “picaresca,” from “pícaro,” for “rogue” or “rascal“) is a popular sub-genre of prose fiction which is usually satirical and depicts, in realistic and often humorous detail, the adventures of a roguish hero of low social class who lives by his wits in a corrupt society. ”

This a surprise to me as I had always thought that a picaresque novel was the description of the trials and tribulations that  a  central character undergoes during a journey – take Tom Jones, Joseph Andrews, Fear and Loathing in Las Vegas, as examples of the genre. This post was meant to be based around a journey and thus I chose the title ‘picaresque’. However I would like to point out that I do not see myself as “a roguish hero of low social class who lives by his wits in a corrupt society.”

Reading further in Wikipedia I find;  “The English-language term can simply refer to an episodic recounting of the adventures of an anti-hero on the road.”  Are you still with me?

My journey did not start here but I like the photo.

Back to the road. Saturday night was Harry’s birthday celebration. We eat and alas drink. In very strict Okinawa the choice is get a Daiko, http://www.youtube.com/watch?v=J8GnQrUmzFM   , long, complicated and for me shameful, or accept Alf and Denise’s kind offer of a ride home. A plan hatches. I leave the car at the restaurant and the next morning take Big Red down Route 58, take off her front wheel and stash her in the back of the car and then proceed to music festival in Naha, in which the Irish band, in which I play, are er playing. Are you with  me?

Today I set off but am soon sidetracked by a festival in Yomitan. 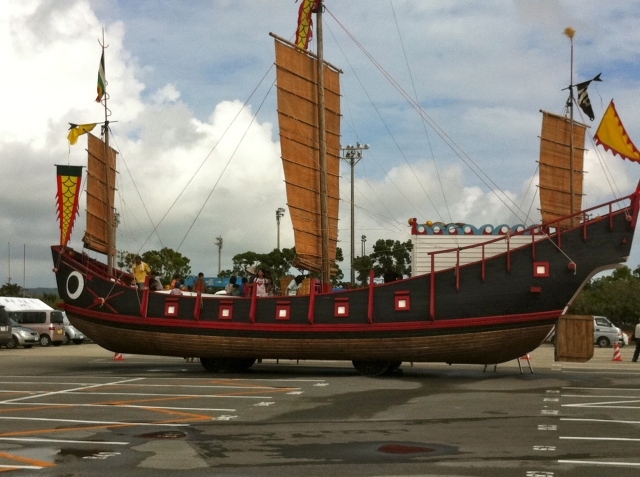 The boat in the parking lot

I bike down Rote 58, which is one of the main North South axes on Okinawa. I sing to myself:

” If you ever want to travel North,

Take the highway that’s got worth

Get there straight on Route 58.

Oh it winds from Cape Hedo to  Nago

Get there straight on Route 58.

Oh you go through  sweet Onna

Get there straight on Route 58.”

I get to the car, drenched in sweat as it is very hot and many miles have been sort of gone over the top of, but exulting in physicality I abandon my original plan and decide to ride my bike all the way to Ginowan, where lives Maho, from whence we will go to the concert. Are you with me?

We then drive to the University of Okinawa in Naha where there is a music festival in which we are playing. The journey is enlivened by a spectacular cloudbrst. Water jets vertically from the drain covers.  It’s the tropics. We drive through deep water, cross swollen junctions and finally get to our destination, where the rain  has put a bit of a dampener on the things.

Two guys are wrestling in the downpour.

Your Momma's is so fat that etc

Yo momma’s so fat, when she walked passed the TV I missed three commercials.

We are next and suddenly the rain stops and blue sky breaks through.

The best Irish band on Okinawa 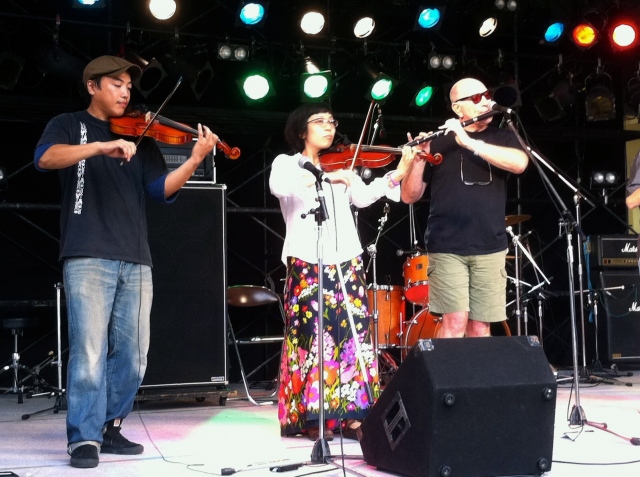 Yo momma’s so fat she was in the middle of the highway I tried to swerve but ran out of gas.

The band after us are famous and rightly so. A mix of The Blues Brothers, Buddy Holly and Japanese stuff that I have no way to describe. 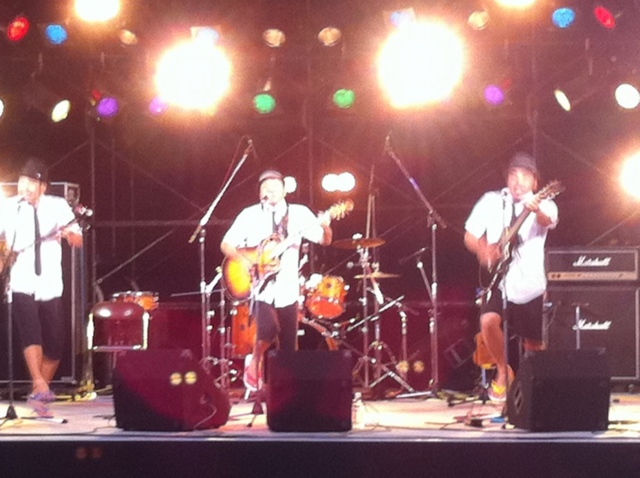 Yo momma's so fat if she got her shoes shined, she'd have to take his word for it!

It is very dark by the time I get back to Maho’s place to pick up Big Red. A further bunch of kilometers to the car, exulting in the cool night air, and so to bed. Picaresque? Never tire of the road.