Abe says, “Man you must be puttin’ me on”

Posted on March 28, 2013 by spikekalashnikov

It being in the springtime, I have excruciating toothache. I go to the dentist who says;

” Y’all got a huge decay thing in your wisdom tooth below the gum.”

I say, “Man, you must be puttin’ me on, I had all my wisdom teeth removed in my twenties.”

Ah yes I remember it well.

M: We met at eight

M: No, you were late

H: Ah, yes, I remember it well We dined with friends

So with my wisdom teeth. The first was exhumed in Oran, Algeria with flies buzzing around and  a drill that had a length of string to connect the drive pulleys. The second was in Merstham in the South of England at my girlfriend’s dentist. This resulted in infection and misery. The third and fourth, or so I thought, were removed at a dental teaching hospital in Sheffield.

You idiot, you stuck it in his lip.

Anyway, it turns out, to my great surprise, that I still have a wisdom tooth and what’s more Mori-sensei says, ” Extract!”

So, at the age of nearly 61, like Highway 61, I crave new experience. Having a wisdom tooth exhumed in Okinawa qualifies.

The dental clinic to which I go, er frequently, is open plan, like much of the workplace in Japan. There are about 12 of us being drilled, bored, extruded and stuff, all in the same room. This was initially weird, as I was used to the closeted intimacy of the western dentistry  leitmotif. Here dentistry is communal.

Mori sensei is a great guy and has a Mohawk 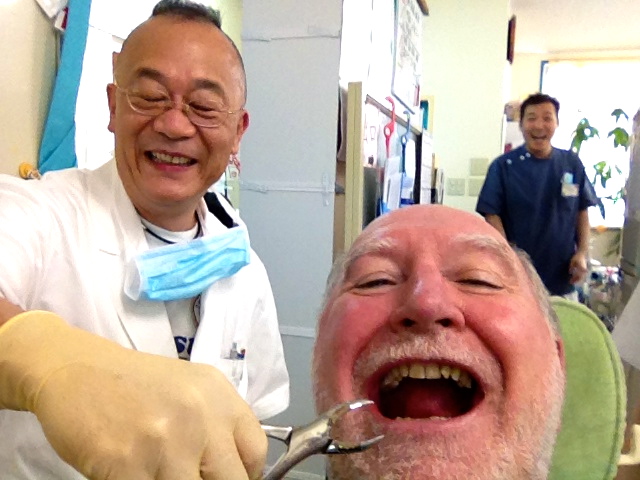 We have a lot of fun

To anesthetize the tooth Mori-sensei gives me longest series of injections. It takes about 10 minutes and I feel zero pain.  There is then a comedy break whereby the nurse asks me to go to the waiting room for 4 minutes, whereas in actual fact she was asking me to change chairs to chair number 4. Much fluster as they rescue me from the waiting room.

Anyway, we get down to business and having removed some gum and interfering bone, Mori-sensei lift my tooth from my jaw with the ease of squeezing toothpaste from the tube.

After some stitching, the joyful nurse places the ex-wisdom tooth into a special magic box.

And he said, “Yes I think it can be easily done
Just take everything down to Highway 61″
Check out the little labbits on her badge.

So, thanks Mori-sensei and all the staff at Furigen dentists.

Who makes special little plastic boxes to put extracted teeth in? A niche market. There is also something wrong with the maths

This entry was posted in Uncategorized and tagged Dentist, Dylan, Okinawa, wisdom. Bookmark the permalink.