Posted on August 15, 2013 by spikekalashnikov

The Sunday subsequent to the wedding provided great excitement. Unknown to me there was an examination to be held in the Kirk. A candidate for the post of Minister for the combined parishes of Kilcalmonell, A’Chleit and Gigha was to preach in the Kirk. Depending on the quality of his performance he could be given the job. The decision would be made by vote by members of the parish. The Kirk was packed. I had to sit upstairs for the first time in my life.

There has been a church here for a long time. http://www.clachanandcleitandgigha.co.uk/clachan/

Upstairs where I sat

I was not alone, there were others up there, their eyes rolling with excitement. People were talking, a shepherd came up to me and showed me a photo of my Father, which he apparently carries around with him permanently. The atmosphere was a close as the Church of Scotland will ever come to Evangelism.

The supplicant arrived wearing the black robes and serious look consistent with his mission of defeating Satan. I thought he did very well. He stood up straight, spoke clearly, looked us in the eye, and introduced his charming young wife and children.

We sang some good hymns, he said some words in Gaelic and the climatic moment had a arrived. The sermon!

His text came from Jeremiah and referred to the dark days before the attack on Jerusalem by Nebuchadnezzar and his horde of vile Babylonians. 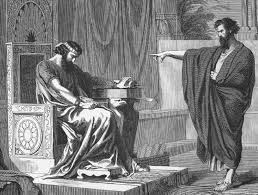 This is the sort of Christianity we like on the West Coast. Jeremiah in face of inevitable disaster went out and bought a field. I have to say that this is part of the Scripture that I was unaware of.

The acquisition of the field of course demonstrated Jeremiah’s confidence in the future of the tribes of Israel and we should also be positive in hard times. Your stock will always bounce back er eventually. He then became controversial. He proposed that the coming of Jesus was a liberation, as the Jews reserved the word of God for themselves and would not spread it to the poor and underprivileged. Jesus, wow, he released the love of God from the elitist club of Judaism and like let it flow.

Strong stuff! This doctrine would not go down well in California but in Kintyre it was music to those who hunger and thirst for righteousness’ sake.

He shall be like a tree planted by waters sending forth its roots by a stream. -jeremiah 17. 8

Later that day we were sitting outside in the sunshine at Bobby’s house watching the rain and sun alternate on Gigha when the phone rang. The man with the charming young wife had won 100% of the votes. We have a Minister!

This entry was posted in Uncategorized and tagged Gigha, Jews. Judaism, Kirk. Bookmark the permalink.