60 Thousand Leagues Under the Sea

Posted on September 23, 2013 by spikekalashnikov

One drawback of my boat is that it is difficult to get back into. Being very light, any attempt to mount from the side simply turns the boat over on top of you. I can just about mount over the stern but it is not easy and I imagine that if I was exhausted or a turtle had bitten my toes off,  I might not complete.

Believe it or not today is another Japanese holiday. “The Autumn Equinox is part of a week called Ohigan, which is a week devoted to paying respect to ancestors much like Obon. It is believed that the land of the living approaches the land of the dead in close proximity on the Equinox. The spider lily is the famous icon of Ohigan. Spider lilies bloom for only a week in mid-September and are commonly planted around graveyards since their poison deters moles and mice.” So there.

I spend the day in the water. I try out a technique, suggested by brother Ian, whereby I tow the kayak out to the dive spot. Once diving is done I clamber onto kayak, which is easy, bring kayak alongside boat and scoot across. We shall see.

Kayak with tank and BCD

Getting in is easy as you inflate BCD to max so that it with tank, having been chucked into the East China Sea,  float and you just slip into it. Then you go and look at fish.

This camera is better.

Coco the Clownfish with wife and family 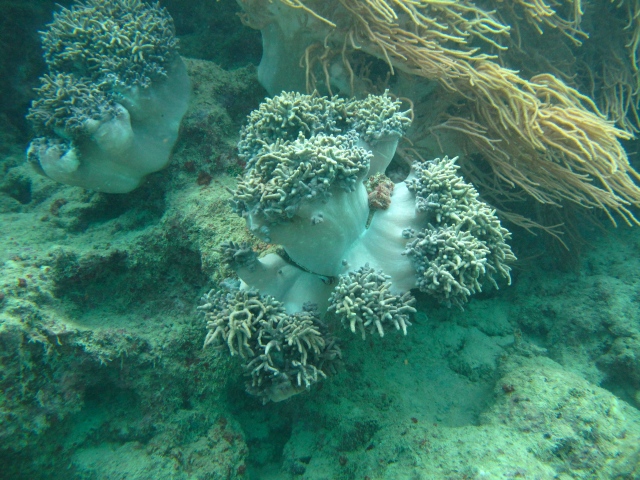 These are big – about 2 ft from top to bottom

Another variety of clownfish.

Joseph fish with coat of many colors 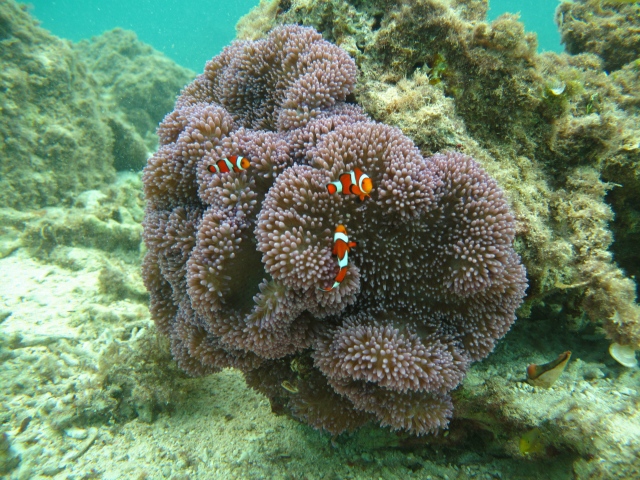 These mothers are dangerous . This one is about 18 inches long http://en.wikipedia.org/wiki/Lion_fish

Anyway,  time comes to stop diving cos I have little air. I dump dive stuff on kayak, scramble aboard pull alongside boat and scoot over. Easy as can be! Two great dives.

This entry was posted in Uncategorized and tagged clownfish, coral, Kayak, mount, scuba. Bookmark the permalink.

5 Responses to 60 Thousand Leagues Under the Sea