Posted on January 11, 2015 by spikekalashnikov

So back in Okinawa, I have to do something with poor wrecked Dileas. Having extracted her from the back passage with much difficulty she now lies stranded on the beach. Why she is still there is due to the fact that about a ton of sand was washed into the space between the inner and outer shells of the boat, making her impossible to move. I cannot leave her on the beach because I feel it is environmentally irresponsible and probably illegal.

Her bottom is broken

I have toyed with the idea of repairing her but I have finally accepted that such ideas are in vain. I have been in denial. This is apparently common after incidents of great emotional distress.

To get her to a place where I can truck her to a dump, I have to flush out the sand, as in her current condition she is impossible to move. How to do so is not obvious. I have purchased 150 meters of hose pipe down which water will pour and eventually flood the innards of Dileas and enema-like drive out the sand. 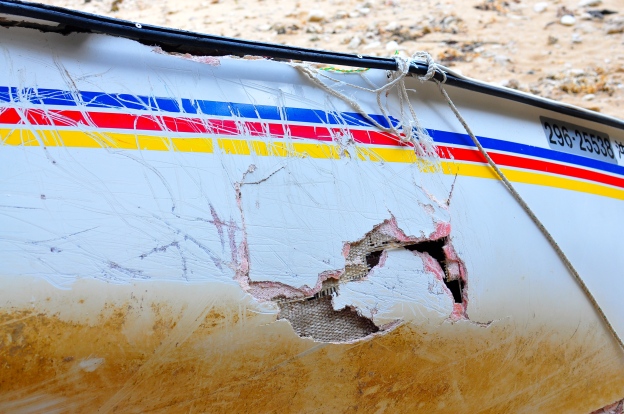 To make this work I have to strategically cut holes in the wreck.

So here are a movie.

This one shows some tragic cutting.

Tomorrow, yet another Japanese public holiday, I  administer the enema.

4 Responses to Cutting Up Dileas