Posted on January 18, 2015 by spikekalashnikov

At last, I have faced the demon that has been mocking me. I have, to my mind, found all kind of excuses for not washing the sand out of poor,wee,crippled, Dileas. The process is simple. Buy  150 meters of hose, stretch it from the lonesome beach where Dileas lies abandoned, link hose to neighbor’s tap, pump water along the hose and then around the most intimate parts of poor, wee Dileas so that, enema like,the mass of sand that has so massively increased the mass of poor, wee, Dileas, is flushed out onto the beach.

My neighbor has been Okinawan. That is to say helpful, smiling, playful, hilarious. He runs one of the most successful restaurant around here but he would never let you know. Ah, dignity. He lets me use his tap.

I love a project

I spray water around her innards. She does not complain. I think she realizes that it is for her own good. Much sand is evacuated.

I now need to turn her over  so that the sand lying in the bottom of the boat becomes the sand on the top of the boat and so easily washed down to the exits that have been exquisitely carved. 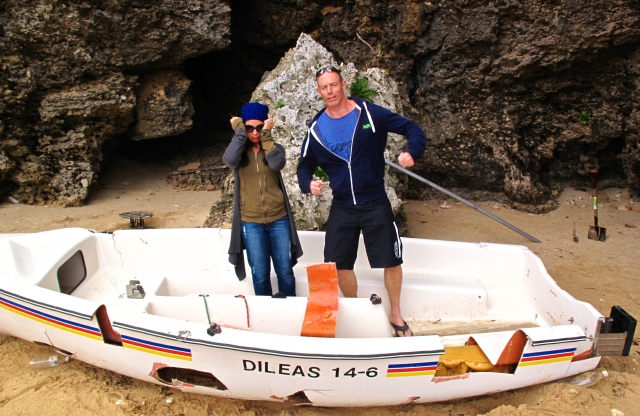 Many thanks to Tina and Darren for their muscle.

So I think the boat is now free from sand.  I will stuff her with floatation stuff. Empty plastic bottles, huge chunks of styrafoam, party balloons, anything that will give her floatation. I will then take her to the sea, float her down to my house, totally boyant despite the huge gashes in her hull. From there I will bring her to dry land and arrange her burial rights.

You will probably have realized that I have got a GoPro. Check out this video.