Posted on April 29, 2015 by spikekalashnikov

I have contracted a very rare skin disease. It is called ‘Screaming Gibbon Foot.’ It originated from gibbons  in Madagascar but has been travelling across the Indian Ocean on the feet of lascars and has now arrived in Okinawa. There is no cure. 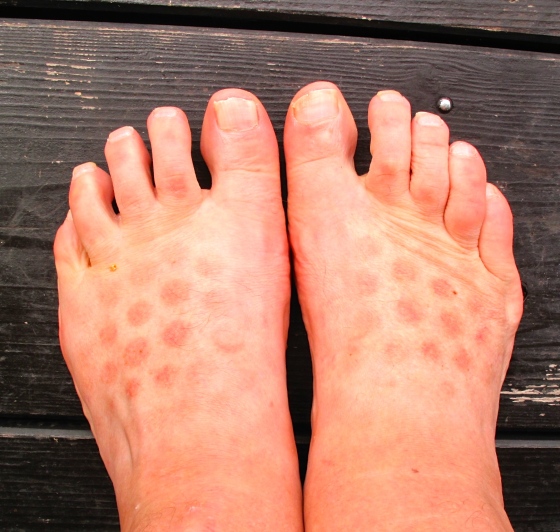 Today is Showa Day, which means it is a holiday! April 29th was Emperor Hirohito’s birthday. He reigned from 1926 to 1989 as the Showa Emperor, so the day became Showa Day. Showa Day also marks the start of Golden Week, a string of holidays in Japan. Japan is such a civilized country.

There is no wind and they day is grey, so I go diving in the Scaffie. This is the first scuba dive of the year and I am interested to see how the Scaffie will behave. Will she sulk? Will she drift away spitefully whilst I am underwater?

I row out to the reef. The Scaffie is a very practical boat. Hauling motors around just for a  300 meter trip is a drag but the Scaffie rows beautifully. We scoot across the lagoon and over the side I go. A lot of boats get very bad tempered if you go off and have fun leaving them on their own. This boat seems content to hang around looking pretty until I get back.

I basically want to see if the equipment is still working after months in the cupboard. I am also searching for clown fish. They are always fun to watch.

Here is a video. Watch it full screen with the highest resolution setting on YouTube.

What fun. Now comes the moment of truth. Can I get back into the boat. This was very difficult on Dileas as she had high freeboard. Not so with the Scaffie. I slither in like a sea lion. This is a huge benefit as it means I can go diving anywhere, even with feeble people, and we will be able to get back into the boat rather than drowning.

I also see the first Black Naped Tern of the year.  Okinawa.