Posted on November 3, 2015 by spikekalashnikov

So, to fortify himself for the voyage Ben fries up big lumps of last-night’s greasy mutton and adds a few eggs fried in mutton grease. I pass.

The weather is fine but windy and the sea is very lumpy but the wind is coming more or less from behind. We nearly wreck trying to get out through the reef as big waves explode all around. We finally get out out but er, like, just. This stiffens our sinews for the rest of the crossing.

There is a serious swell.  As our course takes us way out to sea and then a run down into the Keramas, I am vaguely concerned that the Scaffie might get swamped. We are OK but the movement of the boat is unsettling. I can see the mutton and eggs begin to stir in Ben’s stomach as he goes very pale and does not say much.

We overtake a steamer. Big sea.

After not very much time poor Ben starts discharging the contents of his stomach into a red bucket. He then lies down and suffers for the next 6 hours.

I am Ok thanks to a breakfast of dry toast. We set off at 9:00 and bash out from the coast until we are about 4 miles out. Then we go on a broad reach down to the islands. Hey, this is November but we are in shorts and Tshirts. What a great sail! 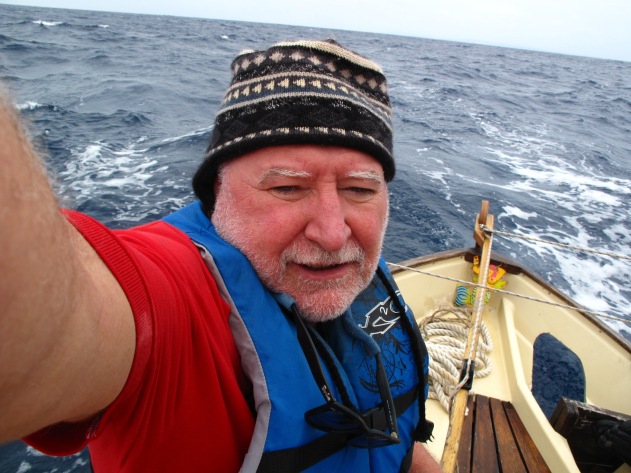 The hours pass. We see only Flying fish, Boobies and one migrating Grey Faced Buzzard. One fish flies across our bows about 2 metres above the surface of the sea. A Brown Booby is so suprised to see us that it circles us  a few times before heading off to Djakarta.

Finally we spy the islands.There can be few finer sights than watching an archipelago of sub tropical islands loom when you are in a small open sailing boat. 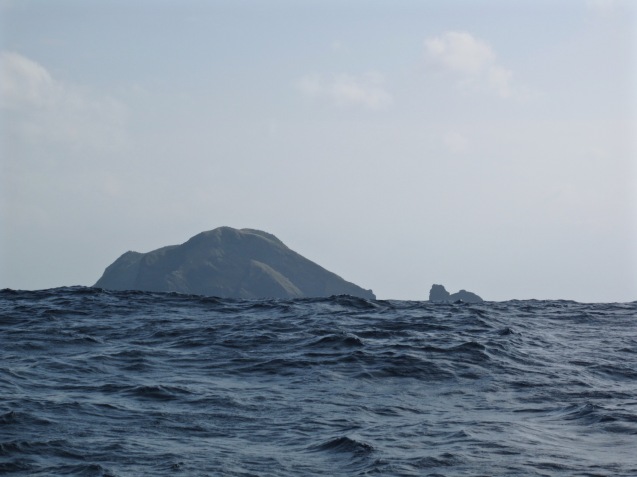 We get to Zamami about 5:00 having rowed a fair way due to lack of wind. Lack of wind! As usual  after a day of  40 kph wind, just as you are about to enter the harbor, all wind disappears and the last mile is flapping sails and oars.

As night falls, we stumble around the tiny town trying to find somewhere to sleep. We are turned away from the inn several times – very courteously, we are in Japan. Feeling a bit downhearted; will we be sleeping in the ditch again?,  we suddenly crash into the Zamamia Guest House.

The owner Paul is a good guy. He sees 8 hours of the open ocean on our faces and says, “We have no rooms but if you want, you can crash in the staff shed.”  Thanks Paul! 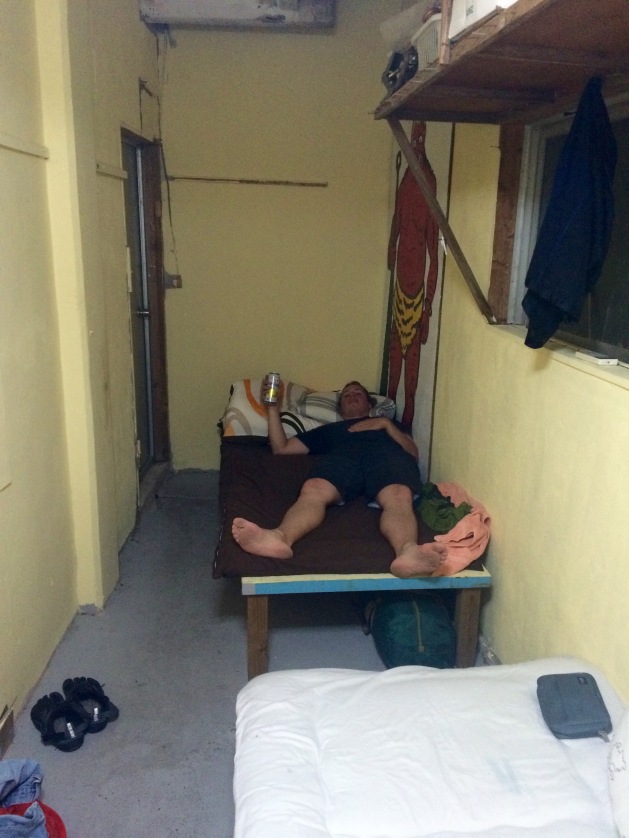 Zamami is a tiny harbor, on a tiny island, off the coast of Okinawa, which itself is lost in the East China Sea. We anticipate quiet. How wrong!

There is a mega party going on to celebrate the fact that it is November. The port is crowded with hundreds of people intent on celebrating November. There are food stands, drinks stands, a raffle, and a series of acts put on by the village folks. It reminds me of similar community craziness in Scotland when I was a boy. It is a really good party.

We stagger back through the  warm, scented alleyways to our shed. A 5 star hotel could not have served us better. Thanks Paul

5 Responses to Greasy Lamb and Eggs