Posted on January 13, 2016 by spikekalashnikov

My learned brother Ian has spent a lot of time researching the life of Sir Ernest Shackleton, who is famous for Antartic exploration and for being the inspiration for Oscar Wilde’s “The Importance of Being Earnest.” 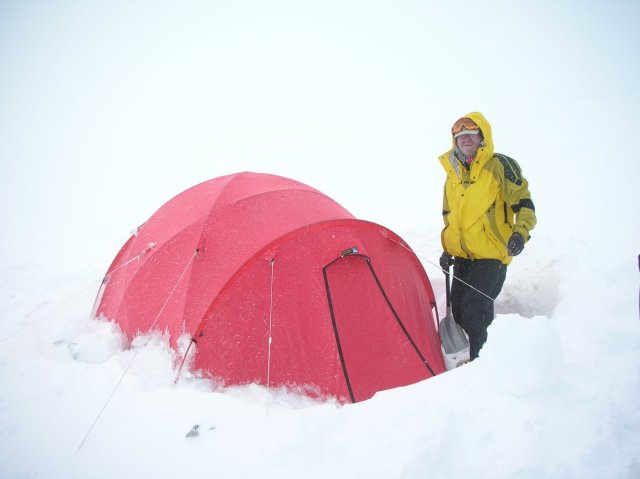 Here  is  Ian on South Georgia doing research with a shovel.

Anyway, he has just published a paper in the Journal of the Royal Society of Medecine proposing that Shackleton had a hole in his heart. The main evidence is that Shackleton ate his dogs and clearly anyone who can eat little doggies must be lacking heart.

“Oh! it is absurd to have a hard-and-fast rule about what one should eat and what one shouldn’t. More than half of modern culture depends on what one shouldn’t eat.” This is a Shackleton quote on eating dogs that was snitched by Wilde. Wild is the chap on the left of the group. He later added an ‘e’ to his name and went on to be a playwright. The dogs in the photo are clearly nervous.

Here is a conversation between McNish and Shackleton during the awful voyage of the James Caird, McNish speaks first.

“How you can sit there, calmly eating muffins when we are in this horrible trouble, I can’t make out. You seem to me to be perfectly heartless.”

“Well, I can’t eat muffins in an agitated manner. The butter would probably get on my cuffs. One should always eat muffins quite calmly. It is the only way to eat them.”

“I say it’s perfectly heartless your eating muffins at all, under the circumstances.”

From this we can understand that Shackleton’s crew were all aware of their leader’s heart condition. The conversation was also shamelessly plagiarized by Wilde.