Posted on October 20, 2012 by spikekalashnikov

I have one of these in Tigh na Mara. It is amazing!

In an induction cooker, a coil of copper wire is placed underneath the cooking pot. An alternating electric current flows through the coil, which produces an oscillating magnetic field. This field induces an electric currentin the pot. Current flowing in the metal pot produces resistive heating which heats the food. While the current is large, it is produced by a low voltage.

An induction cooker is faster and more energy-efficient than a traditional electric cooking surface. It allows instant control of cooking energy similar to gas burners. Other cooking methods use flames or red-hot heating elements; induction heating only heats the pot. Because the surface of the cook top is only heated from contact with the vessel, the possibility of burn injury is significantly less than with other methods. The induction effect does not heat the air around the vessel, resulting in further energy efficiencies. Cooling air is blown through the electronics but emerges only a little warmer than ambient temperature. 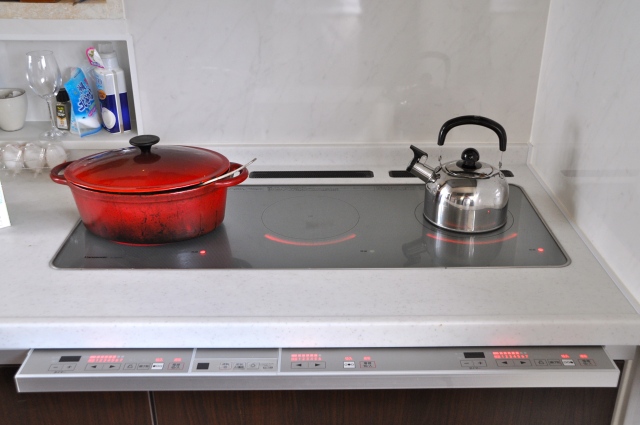 Works just fine with old Le Creuset, which is more or less the only thing I cook in. I refer to the pot not the clothing.

Have not worked out the pane on the left but I think it is timer. The kettle is for extremely fast kettle boiling. It switches itself off as soon as the kettle boils. Hai!!

I have always been very suspicious of electric cookers but this thing is wild. Very fast to very high heat, turndownable to the slightest fremissement on soups, not hot to the touch, very clean, er, sweet and kind. Brand new, of course.

No oven, but my brother Ian has a very admirable clay oven. One of which I am thinking of building.