So I have given up on my  Brugmansia. The first year they were fantastic but they have been going downhill ever since. This year there were only 3 flowers and they are infested with mealy bugs.

I rip them out and clean out all the old root structure from the soil. I have realized also that my secret garden is not a good place to grow stuff – not enough sun. Only Impatiens really flourish. I have moved all my plants out to the road side of the house where there is lots of sun. 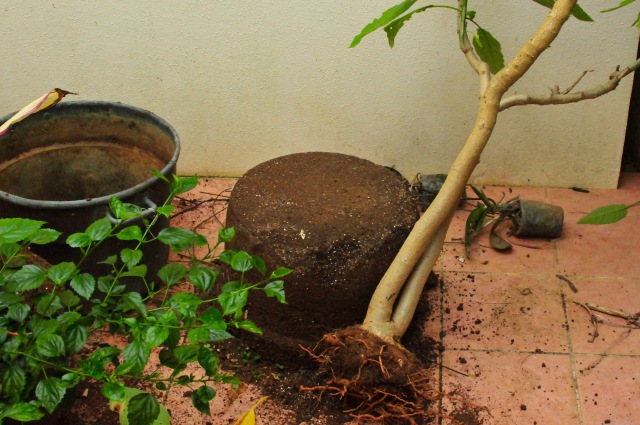 I replant the pots with Plumeria for which I have high hopes. 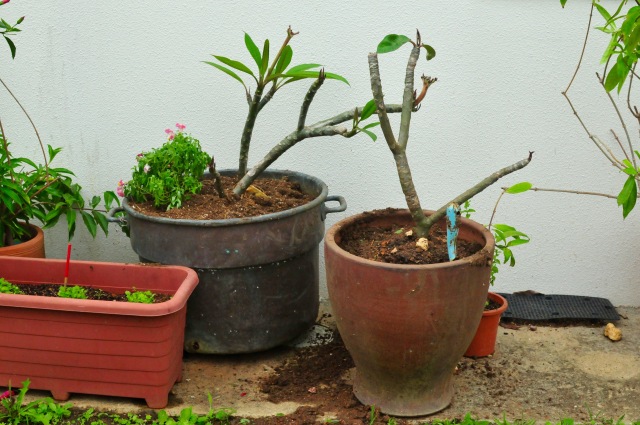 As  I am fiddling around outside, my neighbor from across the road, of whom I see little, sidles over. I am worried as I have concluded that he does not like me.  He keeps calling the police when I have parties. Now he is all smiles and I understand he is having a yagi party and wants me to come. Luckily, yagi is one of the 27 Japanese words I know. It means goat.

I wander over later and hit hardcore Okinawa. All the men are squatting on mats under a canopy in the garden. The women are inside the house. There are two huge cauldrons simmering over gas rings  outside the house. One is full of Yagi soup and the other is I think more mundane beef.

The soup contains goat, liver and tripe. I am given a bag of what looks like chrysthanthemum foliage,  which I think I should add to the soup. Anyway, this is what I do.

The whole deal. Check the  chrysthanthemun

Apparently goat soup enhances virility. This I know because the old guy beside me points at the bowl, grabs my genitals and raises his fore arm in an unmistakeable gesture.

No one speaks a word of English. I pantomime and we all have a jolly good time. The guys are hitting the awamori in a systematic, determined way. They know where they are going.

3 Responses to It’s a Yagi Party!