Posted on June 6, 2016 by spikekalashnikov

So, we will move away from evacuation zone to my ingestion zone. One of my teeth disintegrated a few weeks ago and today I go to have  a crown glued on.

The two ladies take exquisite pains to get everything just right. The crown is taken off for adjustment and then replaced many, many times. They slip little sheets of colored paper between my teeth and say, “Biteu or kash, kash, kash or giri, giri, giri.” depending on whether they want me to bite down, to tap or to grind. My dentistry Japanese is good.

Finally after endless adjustment, the crown seating is presented to the next level of power, who fiddles and grinds a bit and pronounces approval. Then the head honcho is called. He sniffs and tweaks and gives the green light. I am amazed by their extreme diligence. 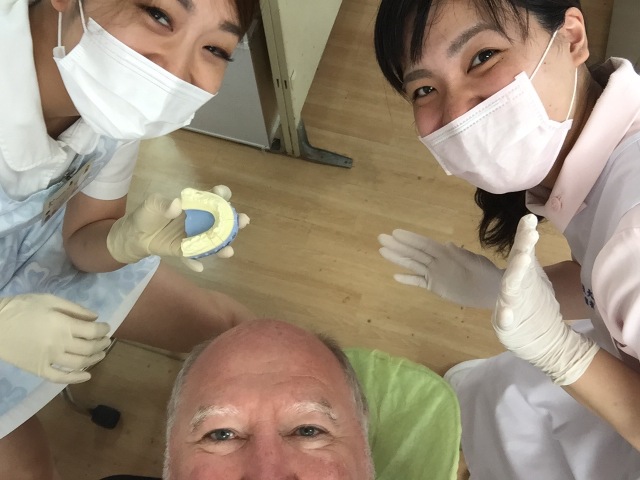 When the going was good. Iha san on the left.

The totally delightful Iha san glues on the crown. She summons the head honcho who looks at it and goes Japanese cosmic. Moans and grunts from honcho, howls from Iha san inform me that something is not right. She has stuck the crown in like wrong. She is in bits.

I do my best to console her but the emotional level is very high. It looks like they will have to cut up the crown and start the treatment afresh – new mould, new crown manufacture, back to square one. To tell you the truth, I have little grasp of what is going on however middle power brings a tool which is hammer-ish and lo she knocks the crown off.

Crown subsequently stuck on properly and I can go. I was in the chair for over 2 hours. Poor Iha san.