Posted on October 28, 2017 by spikekalashnikov

Riding the bus in San Francisco is an insight into socio/politico/economic stuff. Basically poor people take the bus.

Nearly everyone has a bus pass that they press against a sensor but I, being a Gaijin, have to pay cash into the machine on entrance. The fare is $2.75 but the machine gives no change. On the way home from the conference, I only have a twenty. I thought I was OK because the machine has a credit card slot but it turns out it is only for decorative purposes. This means I would have to pay $20 for a bus ride.

I walk up and down the bus asking if anyone had change for a twenty. No luck. By this time the bus is heading down the road and I sit down not sure what to do next. Then a 20 year old hispanic guy, who was waiting behind me to buy his ticket, ambles down the aisle and in a strange backhanded gesture he gives me a ticket. I go,”Um, I, er well.” He says, “It’s good, brother.”

Next, an old timer ambles down the aisle and hands me a bundle of bills, change for a twenty. I thank him and go to find the young guy. I offer him money but he refuses and looks away, with  hauteur.

Throughout all this everyone around, a mixed bag I can tell you, are grinning and laughing. “Just too many good people on this bus,” hoots the black mother with 2 kids in an enormous pram thing. 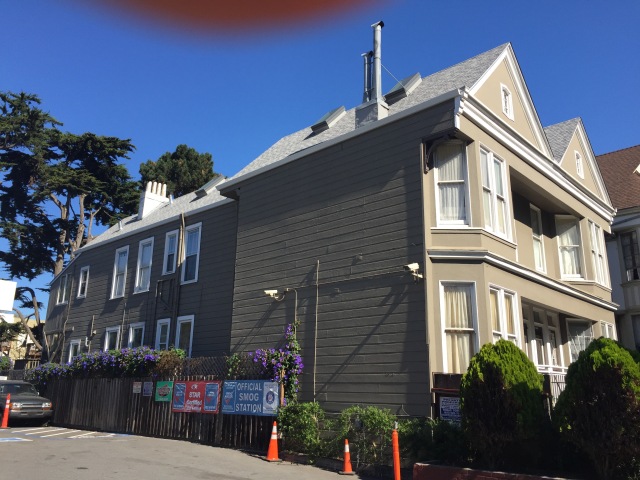 The house as I leave this morning.

Sign outside local supermarket. You can get anything at Lucky’s