Posted on April 6, 2018 by spikekalashnikov

Those of you who have watched the film Braveheart will remember that  the Scots were kinda blue – not emotionally but rather pigmentally.

I am faced with more awfulness of scraping ancient anti-fouling paint, of which there are at least 5 coats, from the bottom of my boat. Most of it is colored blue

Before pain comes pleasure, and I have a delightful lunch with Natori san and Tomomi san.

Notwithstanding, the bottom of the boat has been multiply painted with many coats of different colors of antifouling paint. Should I slap on another coat? Hell no! This is a major refit and so I am obliged to scrape off all the previous coats of paint before I repaint. Why ? I do not know really, other than Puritan work ethic.

I lie on my back under the boat and scrape away the ancient paint. This is both exhausting and very uncomfortable.

I have never been attracted by computer games.

On a different tack, I have felt defeated of late by my center plate. It is jammed in the up position, in which position it is blocked by a retaining pin, which is turn is corroded and immoveable.

What to do do?

Kiyuna san rumbles up on his Harley and I explain my dilemma. He sniffs around and says, ‘Dai jou bu.’ This means, ‘ Hey, no problem.’  I had been much depressed by my center plate, and felt that it might be the punch in the mouth that knocks out my project. It does not worry Kiyuna san, so I guess everything is OK. He is a good person to be around. 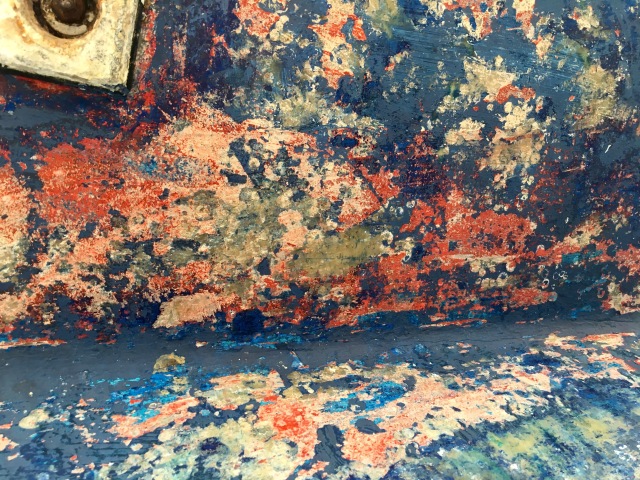 Many coats of paint

I do a good day’s work resulting in a full scraping off of paint under the boat. I will now sand and subsequently apply a new coat of anti-fouling paint.

So here is the big question. Why bother? Why not just paint another layer on to all the others?

Well, I will leave you to think about this.